A major problem identified by almost every organization in Haiti is the deforestation caused by cutting trees for charcoal cooking and the environmental damage it causes. Wood or charcoal are the primary sources of heat for cooking in Haiti. They cook slowly, can only be used outside which is a problem in the rainy season, and they produce unhealthy fumes and smoke. Reluctant to use wood for his own personal needs, Michel Jobin began to look for alternative fuel sources. After intensive research he concluded that kerosene is the best fuel for present day use and that a locally produced, environmentally sustainable fuel could be developed . He found that other countries with the same problem use kerosene, which is readily available throughout Haiti for use as lamp oil. Michel then searched for a stove that burns kerosene that would be suitable for use in Haiti.

Stoves that burn kerosene are not produced in Haiti or anywhere in North America. Research in England, Australia and Asia led to models in India and the Philippines - countries with some of the same problems as Haiti. Michel found the best stoves for Haitian cooking are made by Goodfire Stoves Ltd. in the Philippines. These stoves have efficient precision burners with a simple control to vary the heat as needed. Michel brought some of these to TerrierRouge for testing by local women.The results were amazing and news traveled fast. Welder-mechanics visited Michel's house to examine the stoves and determine the possibility of producing them locally. They concluded that other than the burners, they could make these stoves in Haiti and do this far more cheaply than importing them from the Philippines.

Quest for a suitable stove

The Haitian welders  were delighted to design stove frames suitable to both the burners and Haitian cooking. It was decided that importing precision burners from the Philippines and putting them into stove frames built in Haiti would be both practical and cost effective. (These burners are now made in Haiti). Furthermore, the frames would be larger and stronger to accommodate the large low pots the Haitians use to cook their traditional rice and beans daily meals. Testing of the stoves showed that not only were they healthier, hotter and more controllable than charcoal stoves, but they also provide constant heat and are less expensive to use. 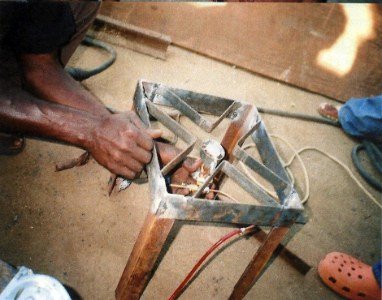 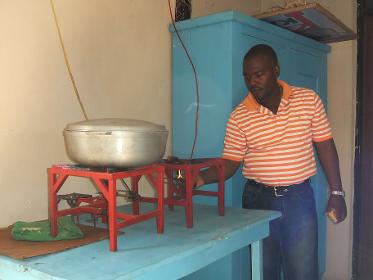 Stoves ready for use and safety demonstration in KAMI office

Most burners that use kerosene or biodiesel fuel require a pump to get the pressure needed to make the hot blue flame that enables fast, controllable cooking. The type of burner made in the Philippines, however, uses a gravity-fed system. When the fuel oil container is installed four feet above these burners, gravity will serve the same purpose. This makes these burners an attractive option, but care must be taken that the stoves are installed and used correctly. When a family purchases a stove in Terrier Rouge, it is installed by a trained KAMI technician and information sessions are given to the family on the stove's operation and safety.

A Greener Fuel than Kerosene

While kerosene is available and inexpensive in Haiti, a better and more sustainable alternative fuel would be one produced there. Happily, KAMI stoves work successfully on biodiesel that comes from seeds of Jatropha. Jatropha is cultivated in China, India and the Philippines and it also grows well in Haiti. At present 6,000 Jatropha trees have been planted in Haiti by KAMI supported cooperatives. KAMI's goal is to encourage more local farmers' cooperatives to grow Jatropha, acquire an oil extruder, and set up a local processing mill in the village of Terrier Rouge. This will enable local farmers to produce a supply of Jatropha oil (biodiesel) for cooking and also for use in oil lamps.