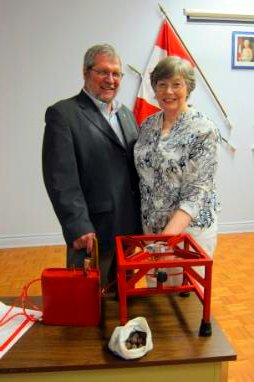 In July 2009 Michel Jobin was invited to speak at a Knights of Columbus event in Orangeville. After sharing his experiences and dreams of being able to help people in Haiti in a meaningful and sustainable way, several people came forward and expressed their willingness to form a foundation to support Michel's work. A constitution was drawn up and a five-year plan developed. The name KAMI comes from the founders' names, KAthleen and MIchel.

Michel Jobin passed away suddenly in Haiti in November 2013. Kathleen Jobin with friends, supporters and the guidance of the S.H.A.R.E. Agriculture Foundation have kept the foundation operating, and its work in Haiti is ongoing. Recently Enactus Ryerson began a collaboration with KAMI.