KAMI's work is centred in Terrier Rouge, a village in the north eastern part of the country. Michel Jobin, director and one of its founders, worked on agriculture education and building projects there for some 20 years. He spoke Creole, understood Haitian culture and had the background and experience in Haiti to successfully develop KAMI's goals.

Haiti is the poorest country in the western hemisphere and one of the 25 poorest in the world. Its economy has severe structural problems and there is an extreme gap between the rich and the poor. Per capita income in 2008 was $1300 (US) in cities and only $300 (US) in rural areas where 80% of the people live on the edge of starvation. Infant mortality and life expectancy rates are the worst in the western hemisphere. Prolonged drought since the 1970s has increased Haiti's dependence on food aid from other countries.The situation has only become worse since the earthquake. The population of Haiti is 8,700,000 with 43% under the age of 15 years.

Terrier Rouge, the location of KAMI's headquarters, is in the country, 40 KMs from the northern border between Haiti and the Dominican Republic.

Approximately 85% of Haitian households cook their food with wood or charcoal. There are a number of disadvantages:

The KAMI foundation for Haiti examined the use of the possible fuel sources below and made the following observations:

KAMI's conclusions were similar to numerous other studies on Haitian cooking fuels: kerosene is the best immediate choice as a substitute for charcoal. But kerosene, as available and inexpensive as it is, must be imported. An even better cooking fuel would be one produced in Haiti. 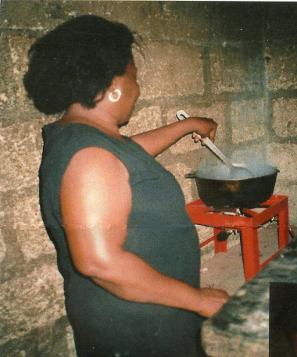 Cooking inside on a KAMI stove fuelled by kerosene.

Soil erosion and deforestation are endemic in Haiti due to centuries of agricultural exploitation, which includes the colonial plantation system of mono-cropping, exportation of cotton, tobacco, sugarcane and coffee and the widespread harvest of timber for export. Tree cutting to meet the demand for charcoal and wood by a growing urban population further stressed the environment. Meanwhile, rural Haiti has provided most of the country's agriculture and rural resources despite the lack of government infrastructure. Although rural populations played an active role in combating erosion with traditional agro-forestry technologies, the rate of degradation was too great to be sustainable. Millions of dollars have been spent by donor aid agencies on large scale agro-forestry initiatives, but there has been little improvement to the environment. Haiti is now 98% deforested. As a result, heavy rains run down the country's mountains unfettered by tree roots that would otherwise absorb water; This brings mud slides and floods. International agencies have responded by hiring Haitians to plant more than 25 million trees. Yet for every new tree planted, seven trees are cut down and used as firewood or charcoal for cooking.